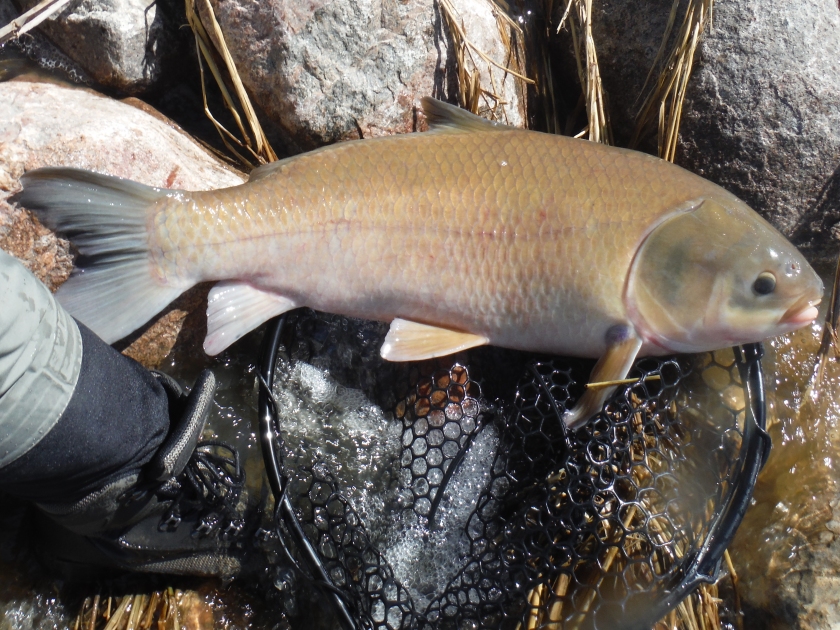 A person never knows what’s lurking in various waters.  I’ve seen tiger muskies caught in lakes where they’ve never been stocked and read reports of eels somehow making it hundreds of miles up small rivers and drainage ditches to waters far from their origin point.  Gar have snapped at the orange foam of a bobber rig I’ve set for crappies, while less-than-attractive bowfin snatched up the minnow hanging underneath it.  The angling experience provides for some interesting encounters with fish that sometimes just don’t seem normal.  Maybe it’s part of the process of learning a new water far from home, or its just some random fish that chance brings to the hook, but it always makes a good story.

One of the earliest experiences I had with odd fish was learning to angle for bass and crappies in the lakes of north Florida while I was in college.  While my efforts from shore were usually limited to docks and piers put in place by the Fish and Wildlife Commission, they often resulted in some sort of action, though it was rarely with my desired sportfish.  In the shallows of spring, all sorts of odd creatures – from cottonmouths to big bullfrogs – would soak up the sun.  Under them the light forms of gar would slowly fin their way along in the skinny water.  Cast after cast I’d try to land them, but their bony mouths provided no place to set the hook, even when it seemed they’d slam a jig or a spoon or aggressively snap my float.

Their rough fish friends, the bowfin, were much more obliging as the scale-headed species is quite voracious and plentiful in the backwaters where I was able to stand without fear of a gator or a snake joining in the spring congregations. While they provided excitement on the line, they were a little unnerving with their large mouths and prehistoric-looking faces when it was time to let them go.

Closer to home, while ice fishing with my wife’s cousins – Billy and Cullen – twins who have now grown up and headed off to college, I stumbled upon an odd baitfish for the first time.  In between the bluegills, crappies and perch that were fast up the hole in a favorite panfishing spot came a brown fish that not even I could not identify on the spot.  Prior to unlimited data plans and cell phone towers on every shore, I snapped a photo of the feather-finned creature and took it home to do some research.  My investigation led me to peg it as a sculpin, with the big eyes and large pectoral fins giving it away as I worked through the dichotomy of the various baitfish species in the area waters.

Amidst the throngs of pike stacked up beneath a rock dam last spring, I had spent much of a three-hour stretch hooked up with the twisting, slashing two-to-five pound males and a couple larger female fish in the spawning mix below.  Between them all though was a massive and memorable buffalo which had inhaled the large streamer I was chucking and ducking from the last of the rocks on shore.  It stayed deep, didn’t run and bullied its way into the middle of the flow with the gray-and-red bucktail stuck firmly in its rubbery jaw.  When it finally surfaced a few feet away from my vantage point, I nearly jumped with surprise, and was able to roll its bulbous body which barely fit into my small rubberized landing net.

Odd encounters exist everywhere there is water: the last of the tiger muskies stocked decades ago in the Sheyenne River, shovelnose sturgeon in amongst the bullheads of southwestern Minnesota’s streams and many other strange species that either aren’t supposed to be in a water but somehow make it there through luck, flood, or hand stocking, surprise us all.  Expect the unexpected this season as you plot out your plans for spring angling and keep track of those odd or out of place fish you encounter…in our outdoors.

Featured Photo: It was odd that a buffalo inhaled a pike streamer last spring, showing that fish can do strange things. Simonson Photo.